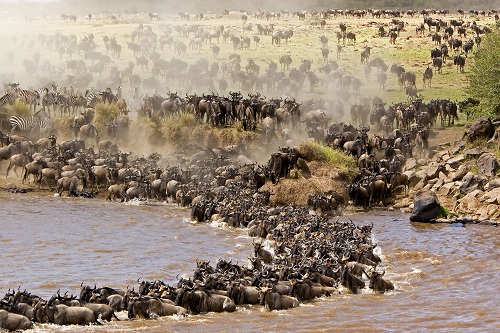 The Maasai Mara National Reserve (also known as Masai Mara and by the locals as The Mara) is a large game reserve in Narok County, Kenya; contiguous with the Serengeti National Park in Mara Region, Tanzania. It is named in honor of the Maasai people (the ancestral inhabitants of the area) and their description of the area when looked at from afar: “Mara,” which is Maa (Maasai language) for “spotted,” an apt description for the circles of trees, scrub, savanna, and cloud shadows that mark the area.

It is globally famous for its exceptional population of Masai lions, African leopards and Tanzanian cheetahs, and the annual migration of zebra, Thomson’s gazelle, and wildebeest to and from the Serengeti every year from July to October, known as the Great Migration.

The Maasai Mara National Reserve (MMNR) covers some 1,510 km2 (583 sq mi) in south-western Kenya. It is the northern-most section of the Mara-Serengeti ecosystem, which covers some 25,000 km2 (9,700 sq mi) in Tanzania and Kenya. It is bounded by the Serengeti Park to the south, the Siria escarpment to the west, and Maasai pastoral ranches to the north, east and west. Rainfall in the ecosystem increases markedly along a southeast–northwest gradient, varies in space and time, and is markedly bimodal. The Sand, Talek River and Mara River are the major rivers draining the reserve. Shrubs and trees fringe most drainage lines and cover hillslopes and hilltops.

The terrain of the reserve is primarily open grassland with seasonal riverlets. In the south-east region are clumps of the distinctive acacia tree. The western border is the Esoit (Siria) Escarpment of the East African Rift, which is a system of rifts some 5,600 km (3,500 mi) long, from Ethiopia’s Red Sea through Kenya, Tanzania, Malawi and into Mozambique. Wildlife tends to be most concentrated here, as the swampy ground means that access to water is always good, while tourist disruption is minimal. The easternmost border is 224 kilometres (139.2 mi) from Nairobi, and hence it is the eastern regions which are most visited by tourists.