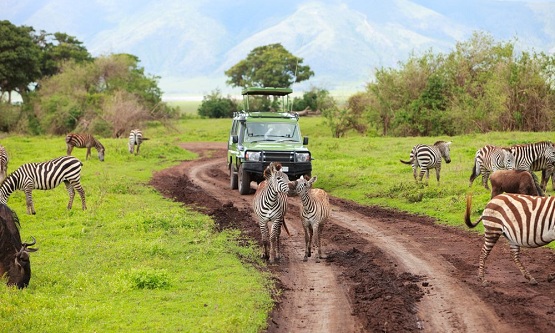 The main feature of the Ngorongoro Conservation Authority is the Ngorongoro Crater, the world’s largest inactive, intact, and unfilled volcanic caldera. The crater, which formed when a large volcano exploded and collapsed on itself two to three million years ago, is 610 metres (2,000 feet) deep and its floor covers 260 square kilometres (100 square miles). Estimates of the height of the original volcano range from 4,500 to 5,800 metres (14,800 to 19,000 feet) high. The elevation of the crater floor is 1,800 metres (5,900 feet) above sea level. The Crater was voted by Seven Natural Wonders as one of the Seven Natural Wonders of Africa in Arusha, Tanzania in February 2013.

The crater highlands on the side facing the easterly trade winds receives 800 to 1,200 millimetres (31 to 47 inches) of rain a year and are covered largely in montane forest. The less-steep west wall receives only 400 to 600 millimetres (16 to 24 inches) and is grassland and bushland dotted with Euphorbia bussei (es) trees. The crater floor is mostly open grassland with two small wooded areas